How to play game

A game with 2 players 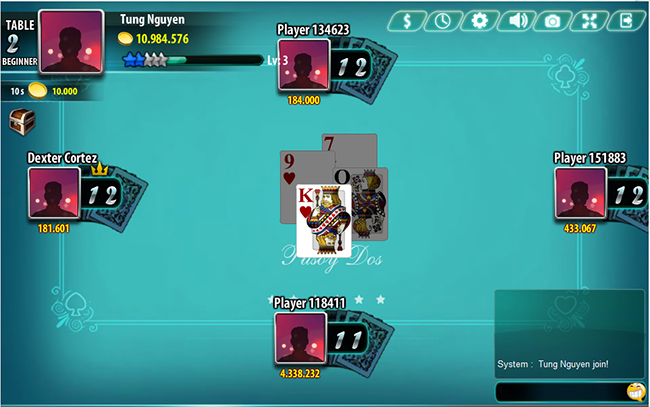 A variation of Big Two, is a popular type of shedding card game with origins in the Philippines. The object of the game is to be the first to discard your hand by playing them to the table. If one cannot be first to play all cards, then the aim is to have as few cards as possible. Cards can be played separately or in certain combinations using poker hand rankings. Games of Pusoy Dos can be played by 2, 3 or 4 people.

There are various types of card combinations that can be used in play.

Single card: Cards rank from 2 (highest) to 3 (lowest). Between cards of the same rank, the higher suit beats the lower suit. That is, a 5♦ beats a 5♥.

Three of a kind: Three equally ranked cards. This is a variation of game play and may be excluded or included as a valid card combination.

Straight Flush Straight flushes are ranked the by the highest single in each straight flush.

Straight are 5 cards with consecutive face values. Straights are ranked by the highest single in each straight. Wrap-arounds are not allowed. Examples: 3*4*5*6*7C is the lowest straight. 1*2*3*4*5 and Q*K*A*2*3 are not straights.

The playable combinations are similar to poker hands, but there are vital differences. Unlike poker, there are no "two pair" combinations, and although a four of a kind needs a fifth card to be complete, a three of a kind cannot be accompanied by extra cards (except for a full house when played as a five-card hand). Because the two has the highest rank, a royal flush does not necessarily beat a straight flush.

The dealer shuffles the deck and then deals one card at a time counter-clockwise until each player has 13 cards (52 cards / 4 players = 13 cards per player).

All players are entitled to know the number of cards each player has in hand at any time, and you must answer truthfully if asked.

The first person to get rid of all his/her cards is the winner and collect all player's bet. Each loser lost 1 bet.

You can use Four of a kind or  Straight flush to beat a 2 Card, you will get: