How to play game 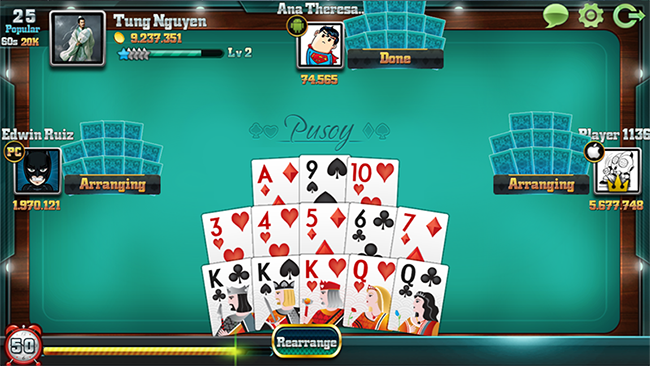 Pusoy (Chinese Poker) is a card game that has been played in the Asian community for many years. It has begun to gain popularity elsewhere because it has many features of an "exciting" gambling game:

* The rules are simple - only a basic knowledge of poker hand rankings is needed to get started.
* There is a large element of luck involved, therefore a beginner has a good chance of winning in the short term, even against experienced opponents.
* The game format results in frequent unexpected wins and high ranking hands.

Pusoy is typically played as a four-person game, though it can also be played with two or three.

A basic knowledge of Poker is needed to play Pusoy. The hands rankings are the same in Poker, from a royal straight flush down to no pair. The highest "front" hand is three aces, and the lowest is 2-3-4.

In Pusoy, each player receives a 13 card hand from a standard 52 card deck. Each player then has to divide their cards into three poker hands:

- Two containing five cards each, also known as  "the middle" and "the back"

- One containing three cards, also known as "the front". There're only 3 possible hand types : Three of a kind - One pair - High card.

After all the players have arranged their hands, each player will announce in turn (clockwise, starting from the left of the dealer) whether or not they are playing their hand. All players then announce their royalties, before revealing their hands.

If a player has NATURALS, they automatically win the hand, regardless of the other players' hands.

The stakes played for in Pusoy are known as UNITS: an amount of money agreed upon before the game starts. Basic scoring rules dictate that a player collects one unit from each opponent whose front, middle or back hand is beaten by their own corresponding hand. Thus, unlike most poker games, being second-best at the table is good enough to win money. In some variants, players are also paid an additional unit if they win in two or three of the hands. In other variants players only get an additional unit if they win all three hands (known as a SCOOP).

The scoring systems used in Pinoygame Pusoy is the 1-6 scoring method. In the 1-6 method the player receives 1 unit for each of the three hands they win, and 3 bonus units (on top of the three for the hands) if they win all three hands.

Royalties, or bonuses as they are sometimes called, are extra units that may be awarded to players with particularly strong hands. Royalties must be declared prior to the revealing of the hands. Some hands and combinations of hands that are commonly awarded royalties are listed:

Naturals are special types of royalties where if dealt to a player, the player is declared winner immediately (prior to anyone surrendering), and the player does not set their hand:

If a player mis-sets their hand (e.g., they put three of a kind in the front, but only two pair in the middle) then they must pay each of their opponents still in the hand an amount equal to being SCOOPED.

If a player win all hand against all players, we call that "PUSOY". The winner'll get amount of GOLD each player follow the formula below:

X: Number player in the table

A: Unit at the Front hand

B: Unit at the Middle hand

C: Unit at the Middl hand